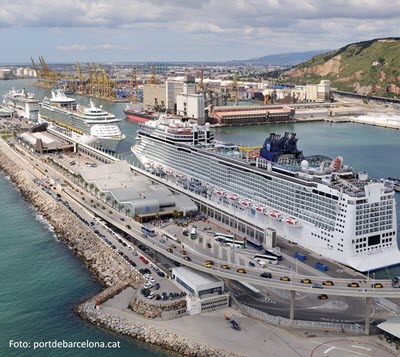 The Port of Barcelona continues its steady growth. With the results of November available, the infrastructure is once again heading towards a historical financial year. In November the port’s monthly growth record was broken, with an increase of 48.5%, according to the Port Authority of Barcelona. Increased container traffic stands out, with a growth of 57.5%, confirming the monthly two-digit growth for cargo of this type.

This data reveals that the total traffic at the port in the first eleven months of 2017 totalled 56.2 million tonnes, with an increase of 26% when compared to 2016. In terms of containers (cargo traffic that is considered strategically important for the port of Barcelona) 2.7 million TEU ​passed through the port between January and November, a figure that represents an increase of 33.7% when compared to the same period in the previous year.

Passenger traffic until November, however, reached 3.9 million, with an increase of 3.7%. Ferries transported 1.3 million people, while cruisers reached a total of 2.59 million. With respect to 2018, the port has a scheduled 867 cruise stopovers. The infrastructure’s operations are now continuously maintained and there is no longer a peak of stopovers between spring and autumn. Two companies distribute the bulk of these operations: Costa Cruceros and MSC Cruceros. The former has scheduled 150 visits, while MSC Cruceros will be responsible for 131 port entries in 2018.

The port of Barcelona is number one in Europe and is ranked fifth in the world in terms of cruise passenger numbers. The economic impact generated by cruises in the city is highly important, and according to a study by the University of Barcelona, ​​cruise passengers leave nearly 900 million euros in the city and the activity provides employment to more than 7,500 people.