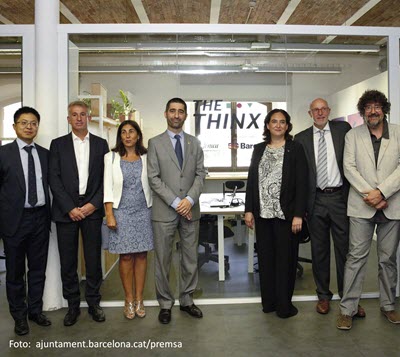 Barcelona not only aims to be the mobile capital. Last 27 September, Telefónica and the initiative promoted by Fundació Mobile World Capital (MWC) 5GBarcelona opened the Thinx-5GBarcelona lab, for 5G projects. It is addressed to start-ups, SMEs, and corporations interested in testing and validating new services and apps with 5G technology, to turn Barcelona into one of the main European digital innovation hubs in the field.

The project is backed up by an initial financial investment of some two million euros, contributed by equal shares between Telefónica and 5GBarcelona. The lab will have a permanent staff of 10 members and aims at taking in four or five projects a year, at least. The lab’s objective is to shorten time to market of products and services in pre-production and speed up other specific pilot programs on 5G technology research.

The lab is located at the Mobile World Capital Barcelona’s premises, in building Pier01, and Thinx-5GBarcelona will provide the companies with an advanced environment which recreates, a year in advance, the technologies and telecoms networks with which they will be operating.

Thinx will have Huawei and Ericsson electronics manufacturers as their technology suppliers, and will be totally free for the selected start-ups. Endigi will be one of the first companies taken in by Thinx. This Catalan start-up has developed a prototype of safety helmet for work environments which allows to know the workers’ real-time conditions.