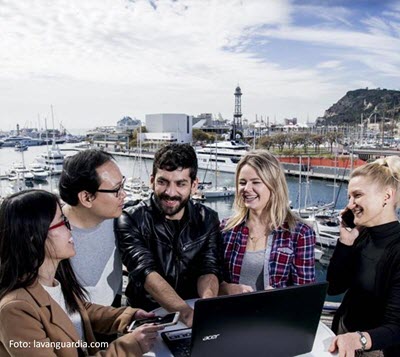 According to the study  ‘La marca ciutat com a factor de creació de valor‘ (City brands as a way to generate value) published recently by EAE Business School, Barcelona is ranked fourth among world cities in attracting talent. The Catalan capital is surpassed only by London, New York and Berlin, according to the study, and comes in three spots higher than on the 2014 ranking.

The business school’s study analyses different aspects of cities, such as their cultural capacity, intellectual wealth, creative capacity and ongoing innovation as factors that determine the economic level of cities and countries.

Barcelona, therefore, has climbed to third in Europe in attractiveness for workers in positions associated with knowledge and high technology. According to the study, this is due to the city’s outlook and commitment to the 22@ Barcelona district and the more than 200 science and technology facilities, benchmark and international technology parks, and research centres.

Furthermore, the city of Barcelona is also the third best European start-up hub based on data from 2018, in this case coming in just behind London and Berlin, as well as the eighth most innovative city in Europe.

So, the ‘La marca ciutat com a factor de creació de valor’ study reveals that Barcelona is a city brand with both tangible and intangible values, which are in its DNA and which it is known for. Some of these tangible values include its model for urban evolution into a tourist destination, as well as being a city of congresses, offering training for executives, scientific production of excellence in medicine, cuisine, Modernisme heritage, and home to FC Barcelona, plus it has become a smart city and global benchmark in trade and shopping.