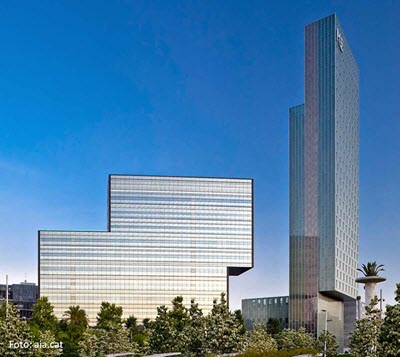 The most sustainable office block in the world is in Barcelona, specifically in the 22@ technological district. Designed by the Catalan firm PGI Engineering, it has reached 101 points within the LEED Platinum certification, a scale that accredits the ‘greenest’ buildings, awarded by the US Green Building Council.

This office complex, named Platinum@BCN, has a surface area of 37,000 m² on carrer de Pallars and has been designed following super efficiency criteria. It achieves 44% of energy savings and 46% less water consumption, which it does using greywater and rainwater, and also thanks to the installation of low water consumption sanitary fittings and taps.

In terms of energy, the building has a solar and geothermal energy capture system. Furthermore, the building has been constructed with 30% savings on material costs, by using recycled material and 70% local materials. On top of this, 100% of the wood used is approved by the FSC, the forestry certification system. Lastly, 87% of the waste generated during construction was recycled.

Barcelona is set to beat the record for office leasing

At the end of the third quarter, leasing on the Barcelona office market grew by 6.4%, reaching 328,000 m2, driven by high demand that took place over the summer months with a series of operations being completed making up around 80,000 m2. This data comes from a quarterly report from real-estate consultants Savills Aguirre Newman, who are predicting a record level of office leasing by the end of 2019, at around 430,000 m2.

The real-estate consultants have pointed out that the good data on leasing are being driven by how well local businesses are doing, but also because the city is consolidating its position as a digital and technological hub. This is an attractive point for international businesses, who are choosing Barcelona as the place to get set up since they can find the talent they need here. In this respect, just in the third quarter of this year, 85 operations have been completed, 22 of which span over 1,000 m2. 22@ is still positioning itself as one of the areas with the greatest level of demand, mainly for foreign tech firms.