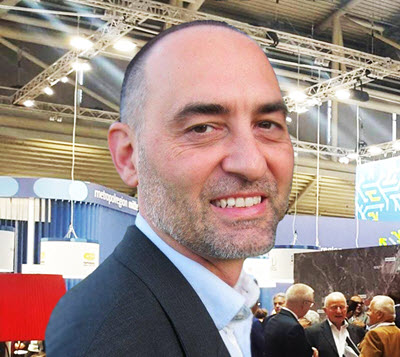 Xavier Mayo, Head of City Promotion Abroad, Barcelona City Council
Forming under the slogan ‘Barcelona Catalonia goes on!’, the Catalan Government, represented by INCASÒL, Barcelona City Council and the Metropolitan Area of Barcelona (AMB) were present at their stand for the tenth year running at Expo Real, in Munich. This event is one of the main real estate fairs in the world and was held this year between the 8th and 10th of October.

Barcelona Catalonia is promoting strategic projects in the metropolitan area of Barcelona, as well as key logistics projects in the Mediterranean corridor. What is the concept and what are their aims?

This is an idea that INCASÒL, the Metropolitan Area of Barcelona and Barcelona City Council have all been working on during the 10 years that the Barcelona Catalonia project has been active. Our proposal is one of economic growth that leaves no one behind, and which promotes opportunities and employment. It is a vision that considers that the success of a society cannot solely be measured in terms of GDP growth points, other aspects need to be considered, such as facilitating good living conditions for its inhabitants and reducing inequalities in a diversified economic model and in infrastructures, such as transport and mobility, and structures, such as training and research. Only with these ingredients will we be able to face up to the challenges and shocks that are coming.

What business projects and opportunities has Barcelona Catalonia offered to International investors at this year’s Expo Real?

Barcelona Catalonia has presented a comprehensive vision of the main projects underway in Barcelona and Catalonia that offer business opportunities to investors. From the 22@ project as a consolidated model of an urban and economic innovation district, to the Diagonal-Besòs Campus with new spaces for co-working, more than 30 new locations for hotel sector projects in municipalities in the metropolitan area of Barcelona, to the new economic and logistics activities sector such at Els Joncs de Gavà.

Barcelona and Catalonia are still a magnet for foreign investment. What factors make this kind of investment attractive?

This is true, the interest of the real estate sector in our region has been established. The main factors that make us attractive for foreign investment are our strategic geographic situation, our transport and communications infrastructures, and our socio-economic climate. Other characteristic features of our living standards, such as the climate and the cultural offer of Catalonia, are all important factors in attracting foreign investment.

Numerous International tech-companies have announced plans to set up or expand in Barcelona. What are the most important firms, and what effects will they have in creating jobs for qualified workers?

We believe that the continued effort of Barcelona Catalonia, despite being a minor one, in promoting the economy of our region and attracting foreign investment, is in fact paying off. The message that Barcelona Catalonia is sending out today to international economic organisations is one that puts forward a solidity and resilience presented by few other investment destinations. One example of this is the city of Barcelona itself where, during the first six months of this year, several international technology companies announced the creation of 1,500 jobs. Nestlé, Microsoft, Sanofi-Aventis, Cisco, Amazon, Facebook (through CCC), Satellogic, WeWork, N26 and King are just some examples of companies that have announced the installation or expansion of their operations in the Catalan capital.

The number of companies with foreign capital in Catalonia has grown by 22% during the last year, while rentals in logistics areas has increased by 55%, mostly due to International investors. With what you have learned at Expo Real, do you believe that the interest of foreign investors will continue in the mid-term?

Well, in fact, we could say that according to our experience in Munich this October the dual factor of Barcelona Catalonia and the pull of foreign investment looks very healthy. We have held several interviews with investors who want to set up in Catalonia with specific projects. This confirms the interest being generated by what is currently on offer and it also reaffirms the importance of our activities at trade fairs like Expo Real.