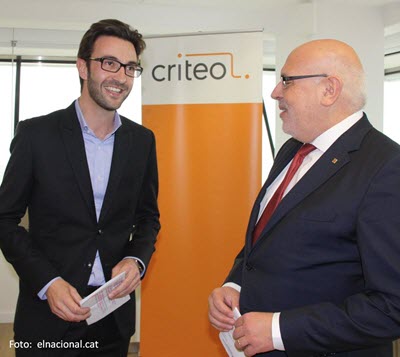 French technology company Criteo, which has made Barcelona its most important headquarters in Europe and the company’s European hub after its central headquarters in Paris, will provide service from Barcelona to its medium-sized clients in 14 countries in Europe, the Middle East and Africa.

The multinational corporation has announced it will create 50 new jobs in these offices in the first quarter of this year, which comes on top of the 200 employees it currently has in its 5,000 m² headquarters on four floors of the Mapfre tower. Professionals at Criteo in Barcelona, from 22 different countries, are mainly young specialists in engineering, marketing, data analysis, web design, human resources and sales.

Criteo specializes in digital marketing campaigns with actions like ads based on users’ interests. The company’s clients include Sony, LetsBonus, Euromaster, Goldcar and H10 Hotels. They participated in this year’s Mobile World Congress (MWC) for the fourth year in a row. The company was founded in 2005 and has 2,500 workers at 30 offices around the world and is present in more than 90 markets.

Sources inside the Catalan government highlight that Criteo, one of the most important companies in its sector, takes advantage of all the opportunities available in Catalonia, including good transport connections, good infrastructure, good universities and technology centers, which generate an ecosystem of technology start-ups and companies that has made Barcelona a global leader.

Criteo highlights that, after exploring the opportunities available in several European cities, they chose Barcelona for the new hub because of the city’s attractiveness and dynamism, which are key to attracting new international talent. The company says that Catalonia and Barcelona are perfectly positioned in Europe as centers of technological growth.