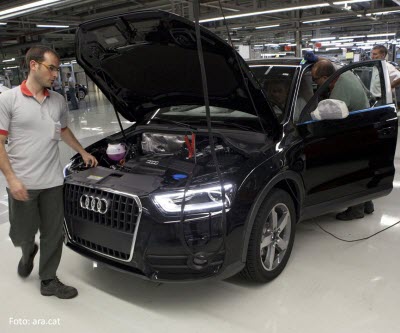 The Volkswagen Group has reaffirmed its industrial commitment in Catalonia, announcing a multi-billion-euro investment in its plant in Martorell, Barcelona: This shows the company’s confidence in this country’s economy. The investment project not only guarantees the future of the company’s facilities in Catalonia but will also have a great impact on Catalan auxiliary industry.

The German consortium recently announced that it will funnel a total of 4.2 billion euros into the factories of Seat, in Martorell, and Volkswagen, in Navarra, between 2015 and 2019. These funds will go to renovate facilities, fuel R&D and develop new products. Although not officially confirmed, everything points to the fact that approximately 3 billion euros will go to the plant in Martorell. The company made this announcement during the initial inauguration of the Barcelona International Motor Show.

At the factory in Martorell, part of the investment will go to improving the production line so it can manufacture the new Audi A1 and the new Seat Ibiza, which the brand expects to launch in 2018. If the company’s plans come to fruition, the Martorell plant could reach 100% of its production capacity, with more than half a million units per year. One of the areas to benefit most from this multi-billion-euro investment from Volkswagen in Martorell will be the Seat technical center, which is the brains of technical innovation and design for the company, with 900 engineers.