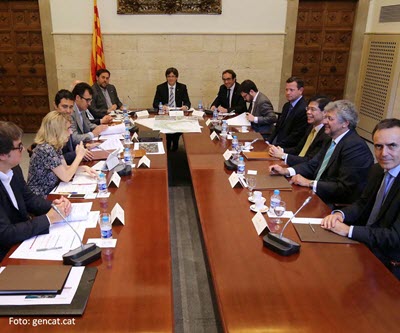 On 29 July, the Catalan government and representatives from Melco, Hard Rock and Grup Peralada –the companies that have been preselected to develop the Vila-seca and Salou Recreation and Tourist Center, known as BCN World– reaffirmed their investment commitment, which they have been working on for more than two years.

The contract signed by  Incasòl –a public company that exercised its purchase option with La Caixa in 2014 to ensure control over the land– and the three groups guarantees that the companies that won the casino license tender will purchase the land in the CRT. Upon signing, each of the companies gave a €2.5 million deposit. The land in the CRT is set aside in the Urban Planning Master Plan (PDU) for hotels, retail outlets, gambling and conventions.

This will be the only tourist product of its kind in Europe, attracting new markets and reducing the seasonality of tourist offering on the Costa Daurada. The Vila-seca and Salou CRT already has an important hub to attract visitors, PortAventura World, which welcomes four million tourists each year and is currently expanding its facilities to include Ferrari Land.

The new project approved has 25% less area for the complex overall and 50% less for casinos, which instead of the 6 originally planned in 2012 will be no more than 2. Sources inside the Government of Catalonia say the new version of the leisure, convention and gambling complex known as BCN World is more realistic and sustainable, balancing the interests and commitment of the investors with territorial integration. The PDU also cuts the buildable area by 25% and the maximum height of buildings from 90 meters to 75 meters.

The project is expected to be awarded to operators in the first quarter of 2017 and work to begin a year from now. Between €2 billion and €2.5 billion in private funds will be invested in the CRT project, which will create 10,000 new jobs when it is fully operational.