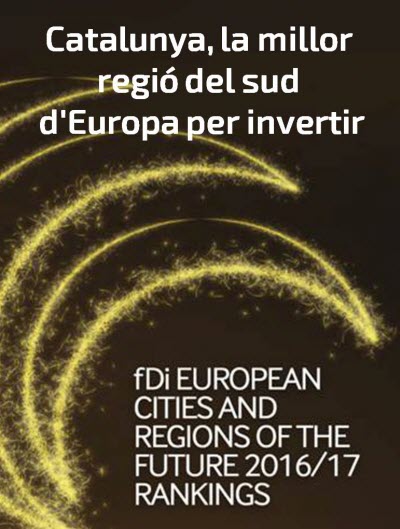 The latest European Cities and Regions of the Future 2016/17 report by the Financial Times FDI Intelligenceputs Catalonia at the top of the ranking of most attractive regions in southern Europe to receive foreign direct investment over the coming years. On the ranking, Catalonia is ahead of the province of Istanbul, the community of Madrid and the region of Lombardy.

The report, which highlights Catalonia’s strategy for attracting foreign investment, the business-friendly setting in the country and the work done by the Catalonia Trade & Investment agency, lists Barcelona as the best city to attract foreign investment among large European urban areas.

On the Top 10 Major European Cities-FDi Strategy ranking, Barcelona is first for best strategy to attract foreign investment, beating out London, Stockholm, Dublin, Amsterdam, Vienna and Milan. The Catalan capital stands out for its commitment to infrastructure, specifically mentioning metro L9, and its digital presence. Barcelona is also ranked 5th among cities with the most business friendly environment.