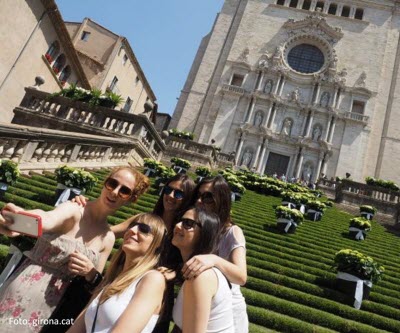 Catalonia was the most popular community with foreign tourists in the month of April, ahead of the Canary Islands and Andalusia. This data was published recently by the Spanish National Statistics Institute (INE) based on the Estadística de Movimientos Turísticos en Fronteras (Survey of Cross-border Touristic Movements – Frontur), which shows that through the end of April 16.1 million foreign tourists have visited Spain.

As the top destination among tourists, Catalonia received 1.4 million foreign tourists in April, up 2.5% from the same month in 2015, making up 24.3% of the national total, followed by the Canary Islands with 17.5% and Andalusia with 16.4%, both with approximately 1 million tourists. The cumulative figures for the year so far show Catalonia welcomed 4.2 million foreign tourists through the end of April, up 6.2% and ahead of the Canary Islands.
Catalonia, community with highest tourist spending in April

Foreign tourists spent 17.9 billion euros through April in Spain, 6.4% more than the same period in 2015, according to the same report by the Spanish National Statistics Institute (INE). Catalonia saw the highest levels of spending, with 21.8% of the total, followed by the Canary Islands (20%) and Andalusia (18.1%). In Catalonia, the internationalization of Sant Jordi celebrations is becoming increasingly important in this month.