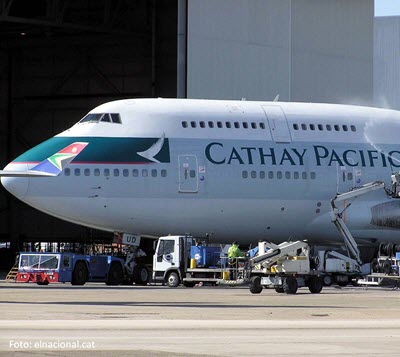 The airline Cathay Pacific unites Barcelona and Hong Kong with a direct flight until 27 October, operating four times a week. The company notes that the flight that was launched today is the only one without stopovers that connects the Catalan capital with Hong Kong, one of the main financial centres of the world.

The metropolitan area of Barcelona is home to more than 140,000 Asian people and, according to data from the Barcelona Chamber of Commerce, the Catalan capital is the main point of origin and destination of the Spanish State with 44.3% of the total of all transit between the state and Asia. In addition, each year more than 60,000 passengers fly indirectly between Hong Kong and Barcelona via other airports all over the world. It is for this reason that the Barcelona Air Route Development Committee (CDRA) has been working intensely in recent years to achieve this connection.

This new direct flight between Barcelona and Hong Kong is an addition to the new connections that started in June by  Level between Barcelona and Los Angeles, San Francisco, Punta Cana and Buenos Aires, and also by  Norwegian to Los Angeles, New York, San Francisco and, from 22 August, Miami. We must remember the recent new flights by Korean Air to Seoul, Air China to Shanghai and Plus Ultra to Havana. There are also new direct routes to Lahore, Islamabad and Tehran.

Barcelona airport will beat all its previous air traffic records this summer. Aena’s forecast indicates a growth compared to last summer of 8% in the number of seats offered by airlines, which is approximately 39 million. Forecasts indicate that in July and August, El Prat airport could overtake Barajas which, despite its growth, is not experiencing anything like the boom that Barcelona airport has seen this summer.