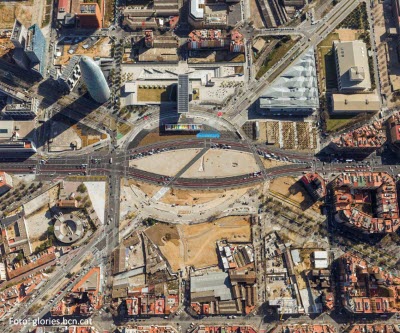 After fifteen months of work, vehicles have made way for pedestrians in the new Plaça de les Glòries. The provisional urbanization on the “mountain” side was inaugurated in March, with provisional facilities like a plant nursery, green spaces, games and sports area, and recreational and cultural spaces, among others. These facilities will occupy the space until the future park is finished.

Tearing down the ring and redesigning the road interchange, in addition to building facilities like the Museu del Disseny and the new Encants, have had a positive impact on the economy in the area. This can be seen in a study compiled by Pompeu Fabra Universityand presented by the Barcelona City Council, which says that for each euro spent in this area, one euro of investment has been generated. It must also be noted that the population in this area has grown, becauseGlòries is becoming an attractive place to live. The surface area approved for major works licenses has also increased 72%, compared to 15% for the rest of the city. These works have focused mainly on building offices and retail spaces.

Furthermore, although the final urbanization of the area won’t be finished until 2018, the speedy urban transformation underway at this former site of a road interchange is making the new space a top priority for large developers who want to invest in the city. As a result, these companies are landing in the neighborhoods surrounding the new Parc de les Glòries at the same time these regeneration and transformation works are being carried out, showing that this area is destined to be the new neuralgic center of the city of Barcelona.