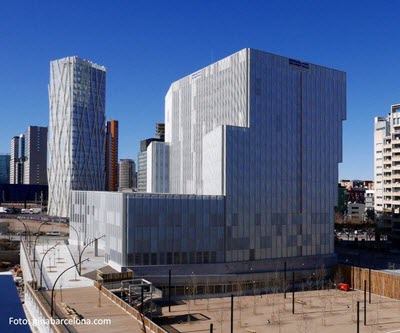 Barcelona and Catalonia now have a new university facility: the recently inaugurated Diagonal-Besòs campus of the Polytechnic University of Catalonia(UPC), which has launched its academic activity this course with the Barcelona East School of Engineering(EEBE). The Diagonal-Besòs campus has 150,000 m2 of land to build on, of which 53,000 m² have already been built. The project has received €97.5 million in investment and was promoted by the UPC, the Government of Catalonia, the Barcelona and Sant Adrià de Besòs City Councils and the Barcelona Regional Council.

The recently inaugurated Campus, straddling the city lines of Barcelona and Sant Adrià de Besòs, is starting off this first year with seven engineering degrees and seven postgraduate degrees, with more than 3,500 students and 400 professors and researchers. This new university campus creates a new metropolitan center and aims to become a benchmark in research and teaching, as well as reactivating a part of the city that has historically been abandoned.

On one hand, this new university facility rethinks industrial engineering, promoting the integration of teaching and research as a way to dynamize the economy. And on the other, the Campus will foster research, innovation and knowledge transfer. The EEBE facilities are home to nearly 30 research groups in different areas of engineering, including biomedicine, nanotechnology, electronics, energy, materials and chemistry.

The new UPC Diagonal-Besòs campus will also promote social and territorial cohesion in this area made up of the Besòs, Maresme, Diagonal Mar and Front Marítim del Poblenou areas of Barcelona and La Mina in Sant Adrià de Besòs. It will be a driving force for economic and social transformation, creating new jobs, boosting local retail and taking advantage of infrastructures.

Construction of the Diagonal-Besòs campus is the Government of Catalonia’s most significant commitment to infrastructure in recent years, after Metro Line 9.