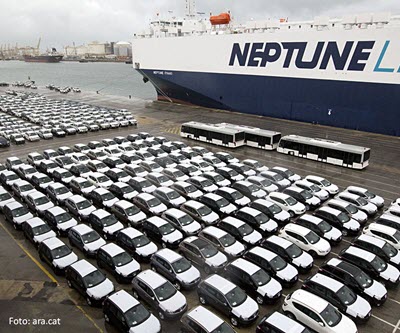 In September, Catalan exports totaled €5.7464 billion, up 2.4% from the same period in 2015, with growth above that of the euro zone (0%), the European Union (-0.9%) and benchmark countries like Germany (1%), France (-1.5%) and the United Kingdom (-4.3%). The Catalan government gave a very positive assessment of these figures, as it was the best September ever in terms of sales abroad by Catalan companies.

In this regard, it must be noted that sales abroad from Catalonia make up 25.8% of all exports from Spain, three tenths more than the figure for all of 2015, when they were 25.5% of the total. It must be noted that Catalan exports totaled €63.84 billion in 2015. This data was published by the Spanish Institute for Foreign Trade (ICEX).

These figures, in short, reveal that the Catalan economy is becoming increasingly internationalized and that this internationalization is part of the tradition and very nature of the Catalan business fabric. It has become an ongoing commitment, beyond a temporary solution to the crisis of internal demand in Spain.