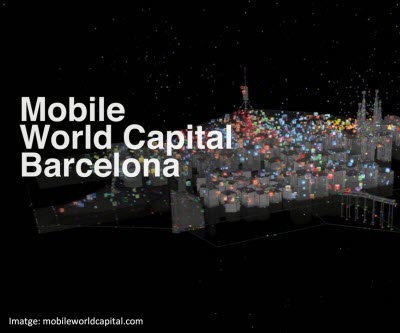 The eleventh edition of the Mobile World Congress(MWC), which kicked off on Monday February 22, closes its doors today having set new records, with 2,100 exhibitors, 100,000 visitors, 160 government delegations and 4,000 media professionals from around the world.

The event, which will have an economic impact on the city of Barcelona of 460 million euros, has generated 13,000 direct jobs during the fair. MWC occupies the 119,000 m2 of floor space at Fira de Barcelona, with 1,200 Wi-Fispots to cover the 40,000 mobile phones in use every hour. It must be noted, furthermore, that this is this third year of 4YFN, which brings together more than 12,000 participants and occupies 18,000 m2 at Fira Montjuïc.

Barcelona has once again become the global center of attention in mobile technology. This edition, with the slogan ‘Mobile is everything’, has paid special attention again to the Internet of Things (IoT), graphene –a material 200 times stronger than steel-, and wearables, as well as the latest news and advances in 5G technology. This year’s edition signaled the return of Google and welcomed Facebook founder Mark Zuckerberg for the third consecutive year, along with Mark Fields, CEO of Ford, discussing the impact of mobile technology on cars. Another noteworthy speaker was the CEO of General Electric Digital, William Ruh.

Catalan stamp on MWC
Last year Catalonia was the 9th country in terms of presence at the Congress. This year, 88 Catalan companies are participating in the Mobile World Congress. In addition to these 88 companies, there are also 18 start-ups at the Fira Montjuïc space for 4 Years from Now (4YFN).
Barcelona has become the leading technology ecosystem in southern Europe and a global benchmark in digital technology and innovation. Companies in the Catalan digital sector posted a joint turnover of 6 billion euros, and there are currently 10,000 people working in this sector. All of this is a result of Barcelona’s commitment to investing in and growing this sector. And Mobile World Congress is a clear driving force behind it.