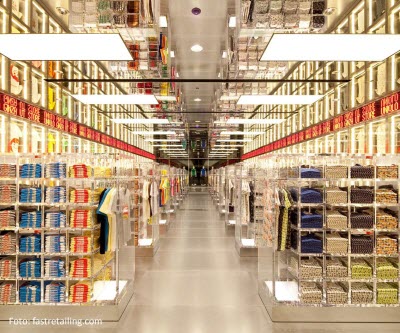 Japanese company Fast Retailing, considered the Inditex of the land of the rising sun, will open a shop in its Uniqlo chain in Barcelona, on the corner of Passeig de Gràcia and Gran Via de les Corts Catalanes. This space is just opposite the Zara flagship store and also very close to one of the most important Mango shops in the city. Therefore, Uniqlo will take advantage of foot traffic between these two important consumer favorites.

Fast Retailing has reached an agreement to lease a 2,500-m2 space at Passeig de Gràcia 18, with a ground floor and two upper floors. The Japanese group tends to operate in buildings with several floors, as is the case in cities like New York.

Although the Japanese group has spent years expanding in Europe and the United States, it hadn’t been able to break into the Spanish market despite trying for years. Its competitors, Inditex and Mango, however, have been in Japan for years now. Uniqlo tried to set up a shop in Barcelona late last year but the property they were looking at, on Rambla de Catalunya, ended up being taken over by Desigual.

Fast Retailing is the fourth largest fashion distributor in the world, behind Inditex, H&M and the Gap, closing the first semester of this year with profits up 56.7% to 853.6 million euros.