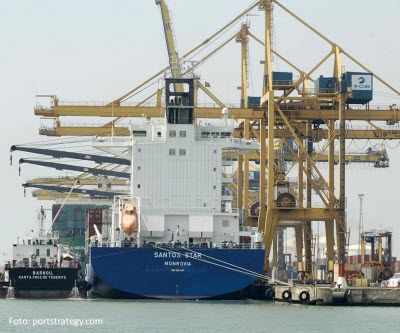 Port operator APM Terminals, a subsidiary of the Danish cargo-transport giant AP Moller-Maersk, has reach an agreement to purchase 60.5% of Grup Marítim TCB, based in Barcelona, which is the main Spanish-owned container-terminal operator and owner of eleven cargo terminals, two of which are located in the Port of Barcelona. The price and terms of the deal haven’t been made public.

With a yearly volume of 3.5 million TEUs (twenty-foot containers), TCB is ranked 23rd in the sector in the world and manages terminals in Barcelona, Valencia, Castellon, Gijon, Santa Cruz de Tenerife and Las Palmas de Gran Canaria, in Spain, as well as other terminals in Turkey, Mexico, Colombia and Brazil.

Furthermore, APM Terminals, based in The Hague, Netherlands, is the third largest container operator in the world, with 38.3 million TEUs each year. This Maersk subsidiary already had one terminal in Algeciras, Cadiz. With the newly closed deal, they will considerably strengthen their presence in Spain, in addition to growing in Latin America, which was one of the main aims of the operation, and Turkey. With the acquisition of TCB, the Danish group now has 74 facilities in forty countries around the world.

This operation will undoubtedly help the Port of Barcelona reach its goal in the middle term, which is none other than becoming the benchmark European port in the Mediterranean, and moving 70 million tons of cargo and 3 million containers a year by 2020.