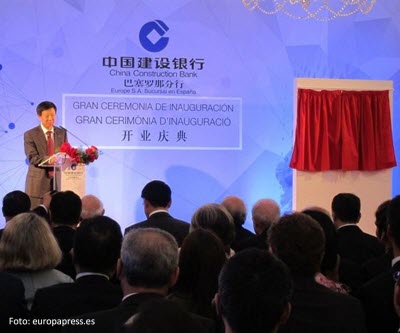 China Construction Bank (CCB), one of the main Chinese banks and the second largest in the world in market capitalization (207.9 billion dollars), has inaugurated its first branch in the city of Barcelona, which is also its first location in Spain.

The company will provide deposits, international funding and syndicated loans for Asian companies operating in Spain and Spanish companies with close commercial ties to China. In this sense, it must be noted that Spain is China’s sixth trade partner and that the Asian giant is Spain’s most important trade partneroutside the European Union. In 2014, trade between China and Spain grew 11.9% to 27.2 billion dollars.

China Construction Bank currently has more than 14,800 branches around the world in cities like Hong Kong, Singapore, Tokyo, Seoul, New York, London and Luxemburg. It is the second large Chinese bank to land in Spain, after Industrial and Commercial Bank of China (ICBC) did so in 2011.

The Barcelona branch, located on the sixth floor of Avinguda Diagonal 640, the Alta Diagonal office building, is opening with 20 employees, half of which are locals. The bank has received support from the Government of Catalonia and the Barcelona City Council during the landing process and in identifying investors and clients.