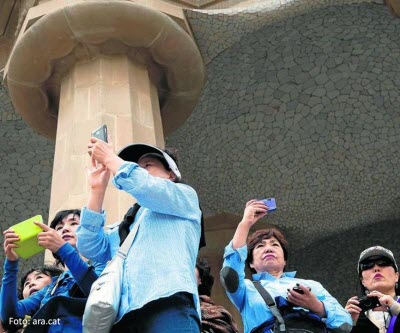 Asian tourism to Catalonia is up 19.3% compared to 2014, with a total of 980,000 visitors in the first nine months of the year, after a cumulative increase of 200% in the previous four years. due in part by direct flights between Barcelona and Asia.

Right now, the biggest group is still tourists from Japan, although the number of Chinese visitors is growing the fastest, to 29% this year. In 2014, Catalonia welcomed roughly 1.1 million visitors from Asia, above all from China and Japan but also from Korea and India, who spent an average of 1,609 euros per person, compared to the 900 on average spent by all foreign visitors.

Furthermore, from January to September this year, visitors from Asia to Catalonia generated a total of 1.472 billion euros, up 29.5% from the same period in 2014, according to data from the Catalan Tourist Board.

The Asia Pacific region is now the fourth tourist emissary in the world and will grow the most. On their visits to Catalonia, Asian visitors are mainly interested in the city of Barcelona, for its culture and shopping opportunities, and normally forego the sun and the beach. These tourists prioritize spending on shopping, even above accommodations.