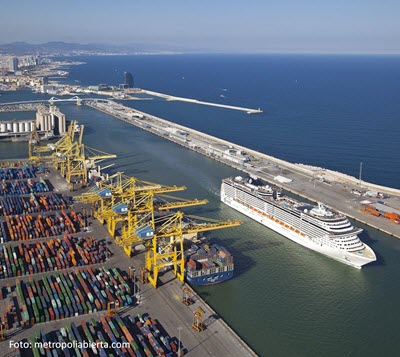 The Port of Barcelona beat all historical records at the end of this year’s first semester. From January to June of this year, the port facilities registered a total goods traffic of 28.6 million tonnes, which is 18 % more than during the previous year, continuing the trend already shown in the first quarter of 2017. These results are the best in the port’s history for a first semester.

It should be noted that traffic increased in three segments; container traffic grew by 27 % compared to the same period last year, while bulk liquids increased by 11 %, and loads transported by shipping increased by 7 %. In terms of passengers, numbers totalled 1.57 million, 5 % more than in the first half of 2016.

Growth has not only occurred in terms of tonnes transported, but also with respect to container numbers. A total traffic of 1.3 million TEU has been registered during this first semester, 27 % more than the last one. Another important factor comes into play when explaining increases in traffic, at the port, and this is the position of the freight redistributor hub, i.e., the place where containers arrive and are offloaded from one ship onto another, before being shipped to their final destination; activities in this sector increased by 101 %.

With these figures, the Port of Barcelona has reduced the difference with respect to its main competitors, the ports of Algeciras and Valencia, which lost 6.7 % and 0.07 % of their traffic, respectively.