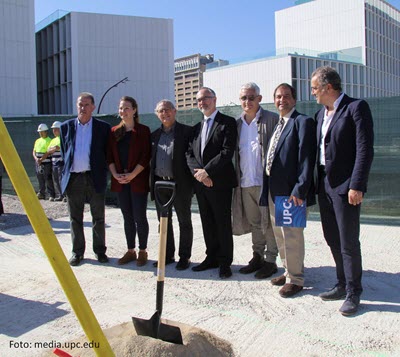 On 25 October, the act of laying the foundation stone took place at the university residence of the  Diagonal-Besòs Campus of the Polytechnic University of Catalonia (UPC). Building work will begin this November in order to provide 300 places for students and teaching and research staff. The residence will be fully operative during the 2019-2020 academic year. The facility itself will be over 6,000 m2 in size and is planned to cost over 14 million euros in terms of investment.

The building will be constructed on the Diagonal-Besòs Campus, next to the green area of the future campus. It will boast an extensive covered area; an extension of the current interior campus walkway, an open and sustainable environment that will symbolise the exchange of knowledge and ideas.

The residence will be constructed in accordance with Passive House energy efficiency standards; a series of rigorous measures that are designed to reduce environmental impact, such as the dual orientation of all rooms, which allows for beneficial cross ventilation, which will ameliorate hotter conditions during the summer months. A solar analysis of the building was also undertaken, on all of its façades, in order to take into account the projection of shadows during the day and at different times of year.

The Diagonal-Besòs Campus is a project headed by the Polytechnic University of Catalonia (UPC), together with the Government of Catalonia, local authorities – who are led by the city councils of Barcelona and Sant Adrià de Besòs -, the County Council of the Barcelonès, the Metropolitan Area of Barcelona, the Regional Government of Barcelona and the Consortium of Besòs. The facility is planned to become a new innovation centre that will be an international benchmark in terms of industrial technology, and at its completion, the Diagonal-Besòs Campus will cover a total area of 77,760 m2 of land and will have 148,266 m2 of built area, dedicated to teaching, research and business.