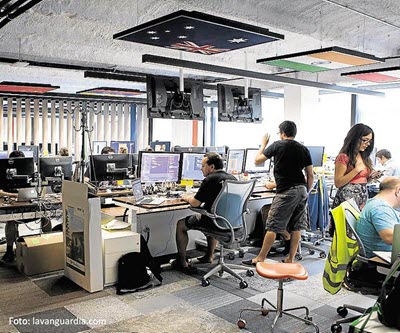 1st January 2018 there was 618,366 operative companies in Catalonia, a 1.5% more than the previous year. This is the highest figure in the past 9 years, according to data by the Directori Central d’Empreses (DIRCE), published yearly by Institut Nacional d’Estadística (INE). These data consider the number of operative companies depending on the location of their headquarters.

Furthermore, Catalonia is the Spanish Autonomous Community with the highest number of operative companies (618,366); ahead of Madrid, which has 538,917 companies. This represents a 2.42% more than last year, while the average increase in Spain was of 1.7%. The figure of Catalan companies with over 1,000 employees grew by 7 and reached the amount of 174, the highest number since 2007.

The data publicized by DIRCE show that the number of companies with headquarters in Catalonia has been growing yearly since 2014 and, despite the decrease between 2008 and 2013, the figure has increased by 7.3%. Throughout Spain, the increase over this period was of 7%.

Sources of the Catalan government highlighted that these data support the fact that Catalonia continues being a centre of business attraction, and that the number of operative companies over the first semester of 2018 shows the soundness of the Catalan economy, able to counteract the change in headquarters that recently affected it, and also to continue with the recovery started in 2014.

It is worth highlighting as well that, according to ACCIÓ, Catalonia is the European region which more resources allocated to innovation projects for small and medium-sized businesses from the European Commission gained, on top of southeast Ireland (50.2 M €), Madrid (48.3 M €), Lombardi (45.8 M €) and Île-de-France (35.5 M €).