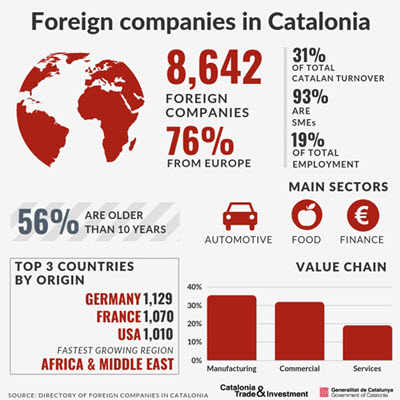 According to the Directori d’Empreses Estrangeres de Catalunya (Directory of Foreign Companies in Catalonia), elaborated by ACCIÓ based on data from 2018, there are 8,642 foreign companies in Catalonia and they represent 31% of the global turnover from all companies operating in the territory. This figure represents a very significant growth compared to the previous one, an increase of 22%. ACCIÓ’s directory identifies all those companies having at least 50% of foreign capital, including their offices, subsidiaries and independent representative offices.

Additionally, the foreign companies’ ecosystem in Catalonia is dynamic and has been consolidated:  19% of them were created over the past five years, while 56% of them have been here for more than a decade. Also, companies 20 years old or more represent 27% of the total. Foreign companies having been established in Catalonia for more than 10 years but less than 20 add up to 29%.

Germany (1,129 companies), France (1,070) and the USA (1,010) are the countries with the highest presence among the 89 ones having established companies in Catalonia. Europe clearly dominates the ranking with 76% of the companies coming from this area, before America (15%), and Asia-Pacific (7%). It must be highlighted as well that Africa-Middle East is the area with the fastest growth, as its presence has grown 60% since 2016.

According to the combined turnover, the motorcar and motorbike sectors (13.4%), food (12.9%) and investment (9.4%) are the ones leading the sectorial ranking of foreign companies operating from Catalonia. In relation to value chain, manufacturing (35.4%), commercialization (31.8%) and services (19%) lead the chart.

These companies find in Catalonia a fit location for developing their innovation and growth projects. Here, clusters, concentration of companies, institutions and related agents play a prominent role. Catalonia pioneers this kind of initiatives and has already 28 accredited clusters, grouping more than 2,200 companies and associates with a joint turnover over €74,000M.