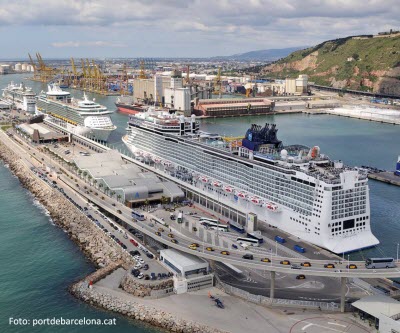 In the first quarter of 2016, the Port of Barcelona moved a total of 11.1 million tons of goods, up 5% from the same period the previous year. There has been growth in all cargo segments. In this regard, container traffic, closely tied to the productive and consumer economy, was up 8% to more than 493,000 TEUs (20-foot containers). Foreign trade continues to post positive results, with export container traffic up 8% and imports up 6%.

In the liquid bulk segment, the Port of Barcelona transported a total of 2.8 million tons in the first three months of the year, 6% more than the same period in 2015, with significant growth in hydrocarbons(+18.5%), and 2.2 million tons of goods registered. Natural gas and chemical products also posted growth, up 9% through the month of March.

Finally, passenger transit also showed a notable increase in the first quarter of 2016, up 12% for a total of 420,624 travelers. The volume of cruise passengers, additionally, was up 10% to 256,045 people. In this regard, there has been a notable increase in turnaround passengers, meaning those who begin or end their trip in Barcelona and, therefore, leave more money in the city, which are up 89%.