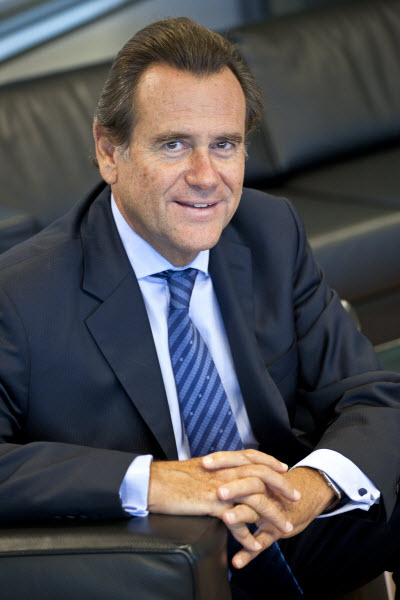 Sixte Cambra, president of the Port of Barcelona

In the first quarter of 2016, all the indicators were up for the Port of Barcelona. This facility, which is key for the country’s economy and its logistics chain, had a prominent place at the International Logistics and Material Handling Exhibition and at the Supply Chain and Logistics Summit, as well as making headlines recently for signing agreements to build new rail access.

What does the agreement signed by the Spanish government regarding rail access mean for the port of Barcelona?

The signing of the two agreements (one governing funding of the rail access and the other the free transfer of one section of rails from FGC to Adif) is an important, essential milestone for promoting the definitive rail connection to the Port. Nevertheless, I would like to refer to two aspects that I believe are important. On one hand, we signed a protocol to promote rail access to the Port of Barcelona in September 2013, after reaching an agreement among the six bodies involved in this action (Ministry of Public Works and Transport, Government of Catalonia, National Port Authority, Port of Barcelona, FGC and Adif). This means we have had to wait three years to take the next step, signing the final agreement. This delay has been unfortunate, above all taking into account the fact that this infrastructure is essential to ensuring the competitiveness of not only the Port but also of all the import and export companies in our country, which are a key driving force for the economy.

On the other hand, it is important to remember that there is still one more step before the tender can be conducted and the work on the access to the Port can begin. The Ministry of Public Works and Transport must approve the Delimitació d’Espais i Usos Portuaris (DEUP – Allocation of Port Uses and Spaces), which will integrate the plot of land along the mouth of the Llobregat River, where the rail lines run, into the port area. Now that the two aforementioned agreements have been signed, we hope the DEUP will also be approved quickly.

For the first quarter of this year, the Port’s indicators for both cargo and passengers are up. What has driven this growth?

We tend to say that the Port of Barcelona is a good barometer for the economy in general and, with the positive results over the first five months of the year, we can say that foreign trade is being consolidated in various cargo segments. In terms of containers, which are strategic for the port and a faithful reflection of the evolution of economic activity in the area, we’ve grown 13%. Import containers continue to be quite dynamic, up 10%, while export containers (with constant growth since 2008) were up 5%. China, the United States, the United Arab Emirates, India and Mexico were the most dynamic trading partners for the Port. Other traffic segments, such as vehicles, bulk solids and hydrocarbons, also posted positive results.

This growth is the result of the efforts of companies from our hinterland (area of influence) to compete abroad and reach further-flung markets, as well as the result of the reactivation of the internal market. Moreover, the expansion and modernization of the ports, carried out between 2000 and 2014 with a total investment of 4 billion euros; promotion of the internal rail network; and the commitment to quality, efficient logistics services (the Efficiency Network quality seal, the Portic telematics platform, the inland maritime terminals strategy, etc.) have also helped increase the competitiveness of the Port and attract new traffic.

The Port of Barcelona has recently participated in both the SIL and the SC&L. How important is the facility within the Catalan logistics chain and the country’s economy?

The Port of Barcelona is a vital gateway for products from Asia into the Iberian Peninsula and Europe in general, as well as a way to channel exports from our hinterland (Catalonia, Aragon, Navarra, Madrid and southern France) towards a wide variety of destinations including China (which has become the number one destination for our products), the United States, Turkey and Brazil. On the other hand, we are also a key distribution hub for the Mediterranean, both in terms of regular lines to transport containers or vehicles and for the motorways of the sea (wheeled-cargo services connecting the Catalan capital with Italy and Northern Africa). Likewise, Barcelona is a strategic port for the exchange of goods between Europe and Latin America, where we have important trade, cultural and historical links. In short, the Port of Barcelona channels 71% of all foreign maritime trade in Catalonia and 22% of that of Spain as a whole, which means more than 54 billion euros of cargo per year.

In this regard, what role does the Port of Barcelona ZAL play?

The Port of Barcelona specializes in foreign trade (imports and exports) and high value-added products, such as consumer goods and distribution, electronic equipment and vehicles. This type of cargo requires value-added logistics services that the Port of Barcelona was a pioneer in offering at its own facilities through the Zona d’Activitats Logístiques (ZAL – Area of Logistics Activities). The ZAL was launched in 1993 with 63 hectares, later adding 143 more, and has become a model of success. It is now home to 130 companies on a total of 206 hectares of land. The ZAL is currently expanding (with Merlin Properties as a new benchmark partner), managing 23 additional hectares in Barcelona’s Zona Franca. For a port of our characteristics and the type of cargo we handle, the ZAL is a key element that sets us apart and generates value and jobs, helping attract quality logistics chains and traffic.

What investment is currently underway and what is foreseen for the short-middle term?

This year, the Port has earmarked 129 million euros for investment in the rail access, renovating fishing facilities, civil works for the new syncrolift at Marina Barcelona 92, rehabilitating the Portal de la Pau building, works related to the new ICL terminal (Iberpotash) and expansion of Moll Adossat.

However, as I mentioned before, I would like to highlight that the 2000-2015 period saw the highest concentration of investment in the recent history of the Port and now, although we continue to do important projects and to invest, we are also concentrating most of our efforts on optimizing management and paying down our long-term debt, mainly with the European Investment Bank (EIB).

In 2015, the Port completed its large expansion, which involved moving the mouth of the Llobregat River, building two sheltering dikes to the south and the east, and developing the BEST and ZAL Prat container terminals, among other projects. The Port of Barcelona invested more than 2 billion euros for this expansion, with an additional 2 billion euros from private sources.

Right now, where is the Port of Barcelona on the ranking of European and world ports?

It depends on the segment of activity, as Barcelona is a highly diversified port operating in different lines of business. We’re the number one port in Spain in terms of economic size and value of the cargo we handle; we’re the number one port in the Mediterranean in vehicle traffic and the top cruise port in Europe and the Mediterranean, as well as being fourth among home ports in the world. We are leaders in Spain in terms of motorways of the sea (combined service of wheeled cargo and shipping to Italy and northern Africa).

Finally, what are the Port’s future challenges in terms of investment, growth, global presence and conductivity?

Our strategy is based on one fundamental premise: the Port of Barcelona is here to serve the economy around us and our mission is to help make our clients more competitive by providing efficient services. Growth isn’t an end in and of itself, but a consequence of fulfilling our mission and helping companies that channel their goods through our facilities to become more competitive on the global market. However, the Port wants to grow, attracting traffic is one of the facility’s main goals and, in short, growth is one of the three focal points (along with competitiveness and sustainability) on which our strategy is based.

The Port of Barcelona is a top-notch facility, prepared for the largest container ships currently sailing the seas. We are the most productive port in the Mediterranean (and third in all of Europe) and the high standards of quality of all the stakeholders in the logistics chain are a guarantee of excellence for our clients. This means we can compete with ports in northern Europe, but to do so we must strengthen our presence in our area of influence: only by going further and loyalizing companies from the internal market, which don’t have direct access to the sea, can we reach the critical mass needed to attract large shipping lines, which will in turn ensure the connectivity our clients require.

In addition to consolidating our position with the hinterland, we are working to attract the distribution centers of large logistics operators or multinational companies to the area around the Port. This is a firm commitment to logistics, as we are convinced that it is one of the key sectors for the global economy and an important way to generate value, employment and wealth.