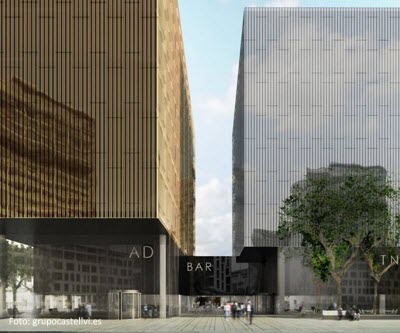 The Castellví development group and the Stoneweg and Global Danbury international real estate investment platforms have reached an agreement to begin developing a complex of two office buildings in the22@ Business Park in Barcelona, next to Plaça de les Glòries, in the 22@ technology district.

The new complex, which will receive a total investment of 45 million euros, will have two buildings each with eight floors, with a total floor space of 26,000 m2. It is the first office construction project to go on the free market in Barcelona in recent years, as office buildings constructed previous had been turnkey projects, meaning there was a lease agreement with the company that would later occupy it in place before work began.

The Castellví group has traditionally been one of the most active developers in the 22@ district, where they have put up unique buildings including the Comissió del Mercat de les Telecomunicacions (CMT), the Interface Building and the corporate headquarters of Indra, Ogilvy and T-Systems. The work, according to sources inside Castellví, will finish in the third quarter of 2017, although it will go on the market immediately.