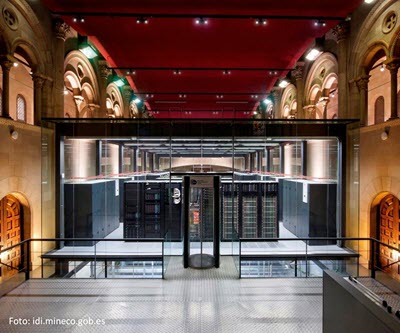 Information and communication technology (ICT) is changing the economic model to one in which generating, processing and transferring information is one of the key sources of productivity. Barcelona is firmly committed to ICT and the knowledge economy, which generates R&D and many qualified jobs. The exceedingly urban nature of ICT-related activities mean this new productive sector is closely tied to the city of knowledge.

Noteworthy among benchmark bodies in this sector is the Barcelona Supercomputing Center, a pioneer in Spain in high-performance computing (HPC). This center’s function is twofold: to provide supercomputing facilities and services for scientists around Europe and to generate knowledge and technology to be transferred to society. It’s previous supercomputer, the MareNostrum, was the most powerful in Spain and one of the most powerful in Europe.

Recently, the Barcelona Supercomputing Center invested €34 million to purchase a new MareNostrum supercomputer, which will be 12 times more powerful than its current one, able to do 13,677 trillion operations per second. This makes it the most powerful in the EU, second in Europe and 12th in the world. The contract for the MareNostrum 4 supercomputer, with a performance capacity of 13.7 petaflops, has been awarded to IBM.

The new machine, which will have the power of 140,000 personal computers combined and will be fully installed on the Polytechnic University of Catalonia (UPC) campus by next June, will be able to do in one day what the first MareNostrum from 2005 took a year to complete. The new supercomputer will be able to process more precise air-quality and climate-change  models, among other research, and be essential in advancing precision medicine through collaborations with centers including the Institute for Research in Biomedicine (IRB), Center for Genomic Regulation(CRG), National Genome Analysis Centers (CNAG), Spanish National Cancer Research Center (CNIO) and Spanish National Center for Cardiovascular Research (CNIC).