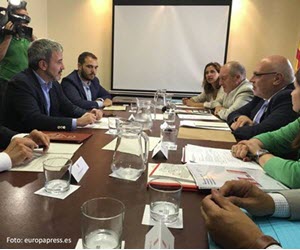 Several European cities, including Paris, Frankfurt, Luxembourg, Amsterdam, Dublin and Madrid, with the support of their respective governments, have made overtures targeted at attracting part of the business interests currently based in London that are expected to leave the United Kingdom due to its departure from the European Union.

The Barcelona City Council has launched a plan to attract productive investment and create quality jobs, which will focus its efforts on taking advantage of the economic situation in Europe generated as a result of Brexit. The program has three main focal points: surveying the situation, promoting/attracting business and providing landing services, through joint actions with the Catalan Ministry of Business and Knowledge.

The plan is especially focused on bringing to Barcelona the economic activity of global companies from non-EU countries looking to operate within the European Community; British companies that need a base within the EU; technology start-ups and entrepreneurs with strong links to the European market; industrial investment funds based in the United Kingdom that will now have to diversify; EU bodies and agencies based in the United Kingdom; and banks and financial entities.

Representatives of the Barcelona City Council began making contact with British administrations, decision-makers, companies and banks in London this past October with the aim of bringing investment to the Catalan capital and promoting Barcelona as an attractive, tolerant, modern innovation environment in a stable, safe and relatively affordable setting from a lifestyle point of view, in a city with great international transport connections, with new routes to America and Asia as proof of Barcelona’s growing international connectivity.

Other factors the municipal government will highlight, with support from the British Chamber of Commerce, in its attempt to convince British investors will be the average office rent (7.35 times cheaper than in London), lower labor costs than in the United Kingdom, a good local market and an entrepreneurial ecosystem, as well as other aspects that set the city apart, including its quality of life.