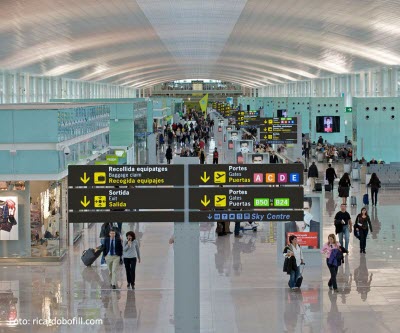 The Barcelona-El Prat Airport is posting noteworthy growth in the number of passengers year after year, making it one of the main airports on the continent. In this regard, El Prat hit a new record for passengers last year with more than 44 million travelers in total, up 11.2% from the previous year. In number of operations, the Barcelona Airport saw a total of 307,864, 6.6% more than in 2015.

Additionally, Barcelona has the fastest growing airport in Europe among those with more than 40 million passengers. This data comes from the Barcelona Air Traffic Observatory, compiled by the Barcelona Chamber of Commerce. This has put the airport ahead of London-Gatwick, Munich and Rome.

Regarding intercontinental flights, the fastest growing market last year was Latin America, with 28.4% more passengers than in 2015. It was followed by North America (+17.7%), the Middle East (+14.7%) and Africa (+11%). However, El Prat must still improve its intercontinental routes. Barcelona still has no direct connection to Tokyo, despite the fact that 250,000 people fly this route from Barcelona each year with a layover, according to data from the Barcelona Air Route Development Committee (CEDRA), a body created to promote the international connections of the Catalan airport.

So, Barcelona is looking to take a huge intercontinental leap forward in 2017. After hitting an all-time record in 2016, the facility is now ranked seventh among European airports. The launch of the new long-haul operating hubs of Norwegian and the IAG group are bringing it closer than ever to becoming a latest-generation hub for international flight connections with a combination of European low-cost airlines and foreign companies.

The new routes that have been or will be launched soon include Norwegian’s new flights to Buenos Aires (which come on top of those the company is already offering to San Francisco, Los Angeles, Miami and New York), Cathay Pacific’s route to Hong Kong, Level’s (a new airline from the IAG) flights to Los Angeles, Oakland and Buenos Aires, Korean Airlines’ to Seoul; Azores Airlines’ to Boston, American Airlines’ to Chicago and Latham Airlines’ to Lima. It is also worth highlighting that Singapore Airlines will fly the A-350 on the Barcelona-Singapore route, the first time this vessel has operated out of Barcelona, and that Air China will run its flight to Shanghai year round.

The new intercontinental connections are another step towards making this facility a true intercontinental hub and promoting Barcelona and Catalonia worldwide as a magnet with investment and economic growth opportunities for social progress, creating new jobs and improving quality of life.