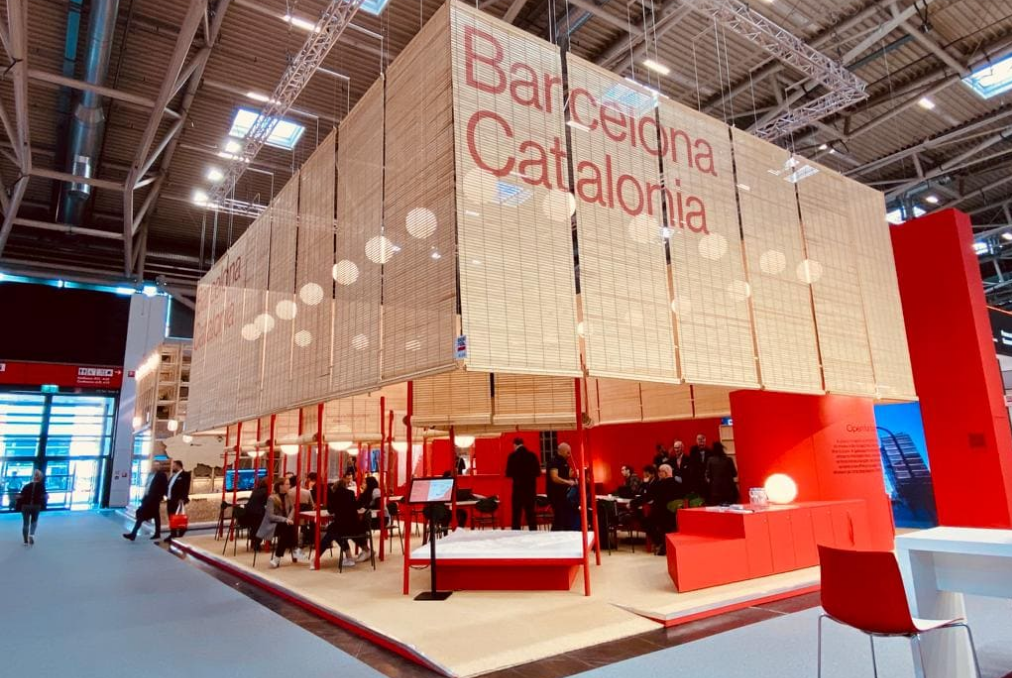 Expo Real 2022 has come to an end and has been really productive for explaining our projects and meeting new people with different points of view. During the fair days, we have met with multiple people, companies and other governments, but we have also organised several conferences and presentations, both at our stand and on the exhibitor stage.

The Barcelona Catalonia Conference, titled “Talent & Innovation hub for urban regeneration: Metropolitan opportunities for global companies”, was the perfect space to share with the visitors and other exhibitors what Barcelona and Catalonia can offer to the international market: talent and innovation.

It was an interesting debate moderated by Grisha Domakowski, Associate Director of Diagonal-Besòs campus at Universitat Politècnica de Catalunya. The speakers were Josep Miquel Piqué, president of Triple Helix A, Anna Esteban, Executive Director of CBRE and Carlos Madrid, CEO of EUROPA-CENTER Iberia.

The debate revolved around the new needs of the Real Estate and investment, focussing on the role talent plays in those investments. As Piqué stated, there are three main factors for new projects and opportunities: talent, technology and finances. And, also according to him, Barcelona has the three of them. Moreover, Esteban, regarding the recession coming from underlying causes, believes that Barcelona is much more stronger and prepared than in past similar situations.

The panel agreed on the need to attract talent to increase investments, as, according to Esteban, companies follow talent and investors follow companies. They talked about several factors that help. For example, Piqué stated that the universities in Barcelona are a magnet for the talent of the world. However, they all agreed that one of the most important aspects is creating a better work-life balance, an easy thing in Barcelona and Catalunya due to its openness and natural beauty.

The official fair schedule also offered the Barcelona Conference, a space where the city council and some of their partners shared the Barcelona Green Deal 2030, an interesting project that is being implemented to make a more sustainable, equitable and competitive Barcelona.

Moderated by Reno Cardiff, from Cushman and Wakefield, and with the interventions of Paco Hugas from Conren Tramway, Grisha Domakowski, from bTEC Foundation Diagonal-Besòs Campus, Eduardo González de Molina, from the Municipal Institute of Housing and Renovation, and Júlia Cordonet, from Barcelona City Council Promotion team, the conference “Invest in Barcelona. The Green Deal Factor” revolved arround the current problems and benefits of Barcelona.

The main points discussed involved the talent cluster created in the city, the challenges housing faces in a packed city, the city government’s efforts on making a greener city, and a specific project, la Mercedes, that aims to rethink a sector of the city to open it to their citizens, enterprises and universities.

The different administrations have shared their projects and so did the partners that came with us. That resulted in a variety of presentations that enriched the debate at our stand, during our meetings and in our networking.

The Catalan Government, through INCASÒL, and the city council of Cerdayola del Vallès shared one of their more ambitious projects at the moment: Parc de l’Alba. It is a new residential and economic sector at Cerdanyola del Vallès. It’s a location where education, innovation and technology meet due to the enterprises that are already established there, the Universitat Autònoma de Barcelona and the Alba Synchrotron.

Barcelona City Council presented its green deal project, explaining in-depth the seven strategic areas that are going to be modified to be more sustainable and friendly to their inhabitants. They also presented a new fund, Buy-to-Rent PPP Fund” that aims to increase affordable housing opportunities in the existing housing market through public and private collaboration.

Aside from Parc de l’Alba, Barcelona’s Metropolitan Area presented Esplugues de Llobregat and the three strategic sectors they are working on: Porta Barcelona, el Gall and Montesa. The projection is to convert them into green areas where people can use the outdoors public spaces.

FOMENTI, a private partner, also presented their project, explaining the current state of the PropTech Cluster, an ecosystem that includes academic institutions and enterprises of different sectors, among others, in Barcelona and Catalonia.

Looking forward to the future