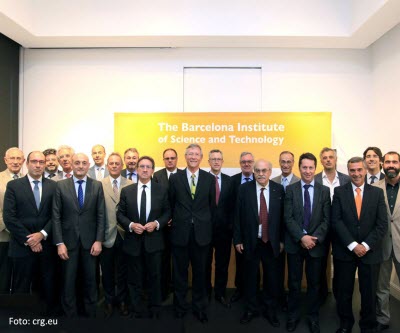 Six of the top Catalan research centers have taken a huge step forward by joining forces to create the Barcelona Institute of Science and Technology. The members are: the Center for Genomic Regulation(CRG), Institute of Chemical Research of Catalonia(ICIQ), Catalan Institute for Nanoscience and Nanotechnology (ICN2), Institute of Photonic Sciences(ICFO), High Energy Physics Institute (IFAE) and Institute for Research in Biomedicine (IRB Barcelona).

This scientific initiative aims to carry out interdisciplinary research, boost the impact of science and position the center among the top scientific institutions in Europe. The Barcelona Institute of Science and Technology is an initiative promoted by the directors of the six participating research centers and five world-renowned scientists.

Its promoters believe that “Now is the time for the Catalan research system to take the leap and consolidate collaboration among these centers through a new institution that will allow for more transversal science projects and boost international competitiveness.”

The BIST has been created with the support of five large foundations, which will have representatives on the board of trustees: ‘la Caixa’ Banking Foundation, Banc Sabadell Foundation, Catalonia-La Pedrera Foundation, Cellex Private Foundation and the Femcat Foundation of Business Leaders. Likewise, the Government of Catalonia will also participate. Montserrat Vendrell, currently CEO of the Barcelona Science Park and Biocat, has been named director of the Barcelona Institute.

Leading European rankings
The Barcelona Institute of Science and Technology has shot straight to the fourth European institution in number of grants from the European Research Council by volume of researchers. The six member centers have received 49 since the beginning of the program, more than 1% of the total in Europe. Regarding indexed publications, the centers that make up the Barcelona Institute published 144 articles in Nature and Science between 2008 and 2012, making up half of all those published by Catalan institutions over this period.