What is Barcelona Catalonia?

A land facing the challenges of the future. A gateway from Europe to the World. A land that attracts the best minds, mixes creativity and innovation, entrepreneurial spirit, and strategic vision. An open land where everything is possible. The place for those who always go one step beyond. The city of your life-time project. Barcelona Catalonia. Open for business.

This is Barcelona and Catalonia. A land with centuries of industrial tradition that has built an economically and environmentally sustainable reality. An economy that proposes inclusive growth, which generates employment and attracts talent.

A society’s success is not measured in short-term increases in the GNP, but in the solidity of the foundations on which quality of life is based, the proactiveness in correcting social inequality, the promotion of a creative and diversified economy, the existence of infrastructures of knowledge and services for production in accordance with the current challenges.

Half of the 7,300 million inhabitants of the Earth live in urban environments, and it is predicted that by 2050 it will be two thirds. Sixty percent of the gross national product throughout the world is generated in 600 urban centers. The world is more and more urbanized and the cities are the hubs from where we must tackle the challenges of the future. Nevertheless, the balance between these urban centers and the land around them is key in guaranteeing the sustainability of the whole and the territorial cohesion.

To take on these new challenges, and within the framework of the parameters defined in the 2030 Agenda for Sustainable Development approved by the United Nations, the Generalitat de Catalunya (autonomous government of Catalonia), through INCASÒL, Barcelona City Council and the AMB (Àrea Metropolitana de Barcelona), with the project Barcelona Catalonia, have made a commitment to a shared strategy to promote the development of new projects, especially in the metropolitan area of Barcelona. These projects depict an urban planning model that aims to be fair, efficient, and sustainable, to prevent the growth of the metropolis generating a disorganized urban sprawl that is predatory with the land and resources and that generates inequality. 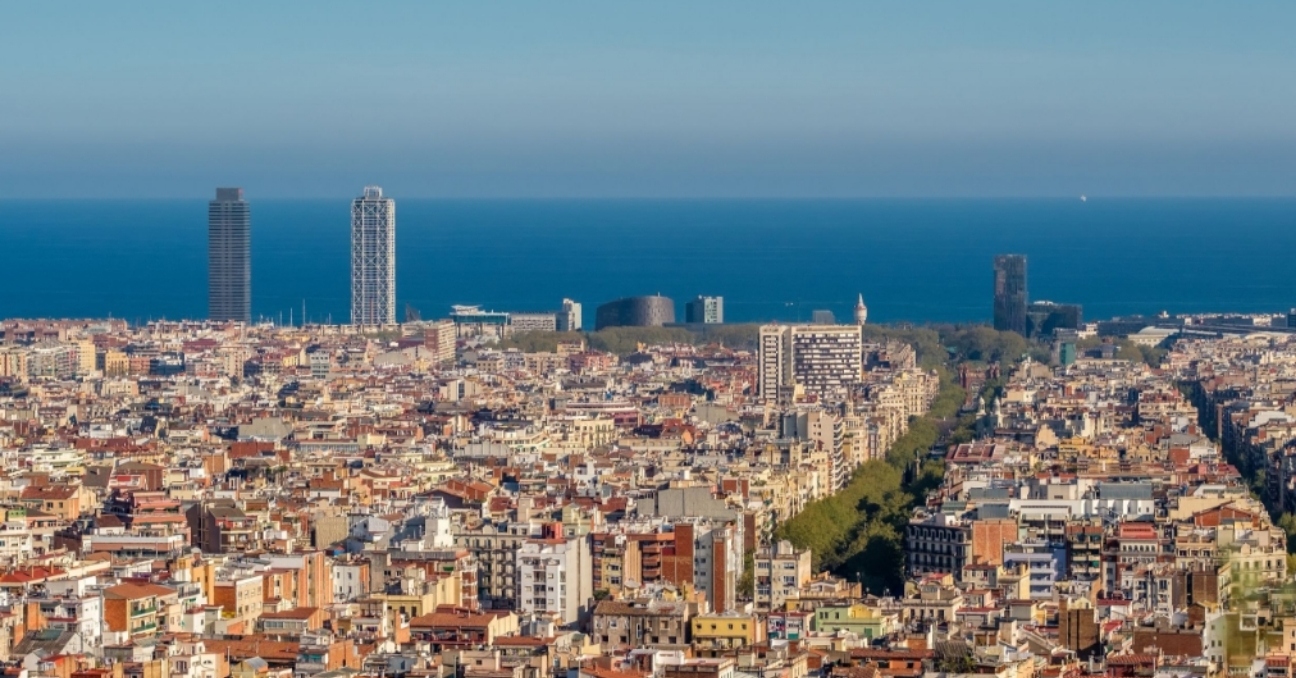 The city of your life project. Barcelona Catalonia. Open for business.

Catalonia, the gateway to Southern Europe, is similar in size to Belgium or Slovenia. With roughly 7.56 million inhabitants, it makes up 16% of the Spanish population and 1.5% of the EU total, the equivalent of Bulgaria or Switzerland. With a GDP of €236.82 billion (2020), the economy is comparable to Finland, the Czech Republic or Portugal.

Catalonia is a country connected to the world through modern, efficient infrastructures, located on one of the main land, road and rail transport routes in Southern Europe, open to shipping routes, and with a top-notch international airport. Catalonia is at the heart of the Pyrenees–Mediterranean Euro region, with 15 million inhabitants and a GDP of €440 billion (equivalent to Austria).

Catalan territory is cohesive: with four metropolitan areas (Barcelona, Tarragona, Lleida and Girona) and the network of vibrant medium-sized cities that are well-connected through a modern network of infrastructures, where the high-capacity fibre optics network reaches 84% of the population.

Catalonia is also a country of great biodiversity and a wide variety of landscapes, where 30% of the territory is covered by some degree of environmental protection and home to 20 natural parks. Its rich heritage, with six groupings of UNESCO heritage sites, coupled with its vibrant cultural offering make Catalonia a tourism powerhouse: 39.4 million visitors a year and €25 million in spending, 1 million tourist beds, 360 music festivals, etc. Catalonia, with Barcelona at its core, is also a global leader in business tourism, with more than 190 congresses and fairs each year.

Catalonia’s economy is diversified with a good balance between the services sector (where highlights include retail, hospitality, finance, leisure and healthcare) and the industrial sector, in particular the chemical and pharmaceutical industries. Catalonia is a country that exports, with steady growth since 2009: Catalan exports make up 26% of those from Spain and 3.6% of the EU-27. 426 million tonnes of cargo pass through and are managed in the territory each year, thanks to the modern logistics infrastructures available to companies.

Catalonia has an important stock of sectors for economic activity throughout its territory. These are spaces that have been adapted to the needs of companies: good connections to infrastructures, good accessibility and services, large plots and complementary support sectors, open spaces and clean energy sources with innovative management models. These spaces for economic activity benefit from their proximity to a rich innovation and research ecosystem with 12 universities, 63 research centres, 22 technology parks, 15 hospital research institutes, 6 advanced technology centres and 3 cutting-edge technology facilities: the Alba synchrotron, the Mare Nostrum Supercomputer and the D Factory for Industry 4.0.

Catalonia is a country connected to the world through modern and efficient infrastructures.

The Barcelona metropolitan area is home to 3.2 million inhabitants, and 5 million in the whole metropolitan region, which is similar to the population of Berlin. Moreover, the Barcelona area welcomes 10 million visitors each year and makes up 52% of the Catalan GDP.

Metropolitan Barcelona is a cohesive city, physically and socially, a polycentric territory of 36 municipalities where services are made available to the whole population, mitigating inequalities. In order to further this integration, an ambitious new Urban-Development Plan is being drafted to help the metropolis tackle the great challenges of the future.

The Barcelona area has one of the most efficient public transport systems in the world (ranked 18th globally according to the University of California, Berkeley). Barcelona also has top-notch international connections and transport infrastructures: the El Prat International Airport, the Sants High-Speed Train Station –which will begin renovations in the coming years– and the new Sagrera central station, under construction, which will be the centre of new urban development for a large swath of the city, centrally located within the metropolitan territory.

Metropolitan Barcelona is also an environmentally responsible territory, balancing human development and respect for nature; a metropolis based on an ecological matrix that brings in health and biodiversity. Spaces like the Llobregat Delta, Collserola Natural Park, the Besòs and Llobregat river banks and the 42 metropolitan beaches are just some of the elements that make up a key green infrastructure for mitigating the effects of climate change.

Barcelona is a city world-renowned for being on the cutting edge in urban development. Currently, it is once again the focus of international attention for its commitment to reinventing public space and adapting it to the 21st century: Cerdà’s Eixample, a paradigm of modern urban development, will become a laboratory over the coming years for a new urban development model that is greener, more dynamic and more inclusive. The ambitious Barcelona SUPERBLOCKS plan is rolling out a new urban model in the centre of the city, designed as a great environmental infrastructure that is also capable of regenerating the social and economic fabrics. Barcelona is also rethinking urban mobility: 85% of internal journeys with clean, sustainable mobility, 180,000 daily cycle journeys, 759 recharging points for electric vehicles, new tram connections and new metro lines and rail connections. All of this puts Barcelona 22nd on the Sustainable Cities Index.

The Barcelona area is responsible for 19.6% of all Spanish exports, is ranked fifth among European start-up hubs, the eighth most attractive in the world for visitors and entrepreneurs (2021), the ninth most competitive city in Europe and the fourth city in the world in hosting international congresses. To expand its economic potential, an ambitious economic agenda is being promoted based on competitiveness, sustainability and fairness. Through the BARCELONA GREEN DEAL, the city hopes to position itself internationally in six strategic sectors: digital, creative, the economy of proximity, the economy of visitors, industry 4.0 and health and biotechnology. This push is founded on a coordinated urban development strategy with six areas or driving projects: re-economizing the historical city centre, transforming the Olympic Port into a hub for the blue economy, promoting the Montjuïc mountain and Fira de Barcelona fairgrounds, turning the Besòs River into a strategic production corridor, creating a new urban centre in Zona Franca and La Marina, and giving the 22@ area a final push.

Barcelona aims to be the digital and technological capital of Europe, a leading city in entrepreneurship and innovation. This is why it is promoting the economy of knowledge with ambitious new projects such as the new institute of science and technology, the BARCELONATECH Diagonal-Besòs campus (UPC) and Parc de l’Alba. New sectors of economic activity are being developed in highly attractive locations: on the outskirts of the city, paired with housing, in new neighbourhoods of great urban quality, connected through top-notch infrastructures and public transport, benefiting from their proximity to the 44 kilometres of urban beaches and green spaces of great ecological and environmental value.