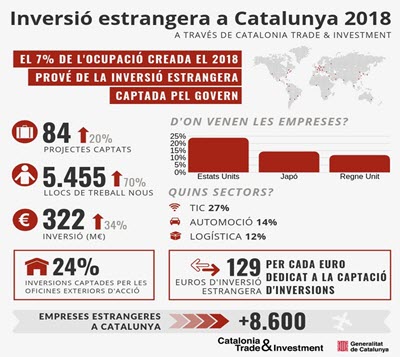 In this regard, the Government of Catalonia attracted 84 foreign investment projects in 2018, up 20% from the previous year, with a total investment of €322 million (+34%) and the creation of 5,455 new jobs (+70%). These projects have received support and guidance from ACCIÓ, the Ministry of Business and Knowledge agency for business competitiveness. Sources inside the Catalan government highlighted that their goal is to drive the productive economy, the job-creating economy, which in the case of the foreign investment projects attracted by ACCIÓ made up 7% of all job creation in Catalonia in 2018.

In 2018, 39% of foreign investment projects carried out were new investments by companies already established in Catalonia, for example to build new plants or production lines. Additionally, 37% of the projects were greenfield, meaning multinational corporations landing in Catalonia for the first time. This type of investment has nearly tripled over the past five years compared to the previous five-year period.